based on wikipedia
Attacus atlas 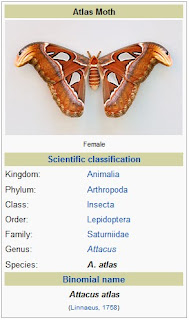 The Atlas moth (Attacus atlas) is a large saturniid moth found in the tropical and subtropical forests of Southeast Asia, and common across the Malay archipelago
Atlas moths are considered the largest moths in the world in terms of total wing surface area [upwards of c. 400 cm2 (62 sq in)]. Their wingspans are also amongst the largest, reaching over 25 cm (10 in). Females are appreciably larger and heavier.
Atlas moths are said to be named after either the Titan of Greek mythology, or their map-like wing patterns. In Hong Kong the Cantonese name translates as "snake's head moth", referring to the apical extension of the forewing, which bears a more than passing resemblance to a snake's head.
The largest lepidopteran in terms of wingspan is thought to be the White Witch, Thysania agrippina. A record specimen of Attacus atlas from Java measured 262 mm, while Thysania are claimed to be about 270–280 mm (11 in). Based on some spread specimens and angle of wing, actual measurements of around 289 mm have been estimated.
In India, Atlas moths are cultivated for their silk in a non-commercial capacity; unlike that produced by the related Silkworm moth (Bombyx mori), Atlas moth silk is secreted as broken strands. This brown, wool-like silk is thought to have greater durability and is known as fagara. Atlas moth cocoons have been employed as purses in Taiwan.

DESCRIPTION
Atlas moths are predominantly tawny to maroon in colour with roughly triangular, diaphanous "eyes" on both forewing and hindwing, bordered in black. The purpose of these dramatic, gossamer portals is not clear, but they are thought to play a role in predator avoidance. Their bodies are hairy and disproportionately small compared to their wings. Patterns and colouration vary among the many described subspecies. Male Atlas moths are distinguished from females by their smaller size, more tapered wings, and larger, bushier antennae.
Neither sex possess fully formed mouthparts and therefore do not feed; throughout their 1–2-week adult life they survive entirely on larval fat reserves that they build up while they are caterpillars.

Females are sexually passive, releasing powerful pheromones which males detect and home in on with the help of chemoreceptors located on their large feathery antennae. Males may thus be attracted from several kilometres downwind. Atlas moths are unsteady fliers, and the female does not stray far from the location of her discarded chrysalis: she seeks a perch where the air currents will best carry her pheromones. 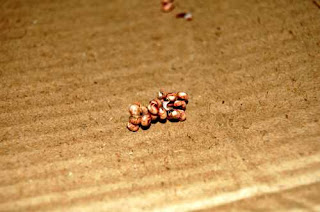 Once mated, the female lays a number of spherical eggs 2.5 mm in diameter on the undersides of leaves. Dusty-green caterpillars hatch after about two weeks and feed voraciously on the foliage of certain citrus and other evergreen trees. The caterpillars are adorned with fleshy spines along their backs which are covered in a waxy white substance. 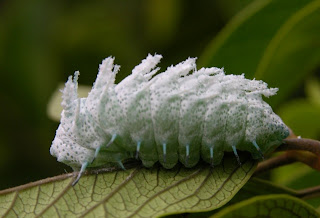 After reaching a length of about 115 millimetres (4.5 in), the caterpillars pupate within papery cocoon interwoven into desiccated leaves. The adult moths emerge after about four weeks. 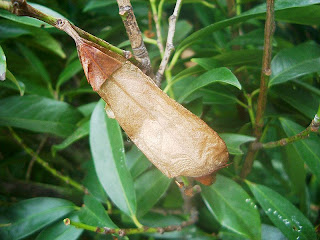 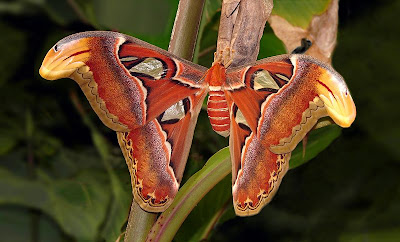 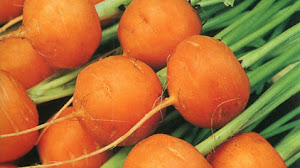